A locked vault, inside an impenetrable fortress. A deadly prize within.

Upon the successful completion of a risky undercover assignment in the States, the covert salvage operative known only as Korso is contacted by his only real ally, the mysterious hacker M.D. Dog.

Tracked down by Interpol's cybercrimes unit, Dog faces life imprisonment unless they betray a client - the merciless South American crime lord Miguel Quezada - whom Interpol are convinced ordered the Guatemalan Vice President's assassination a year before.

Knowing Korso is the only one who can help, Dog wants him to infiltrate Quezada's heavily guarded compound to recover the murder weapon - a Mayan jade dagger - hidden in a safe room somewhere on his property.

Get the dagger to Interpol and Dog goes free. Fail? And it will be the end of them both...

SANCTUM, the second in the Korso series published by Canelo, is on sale now in paperback & ebook. 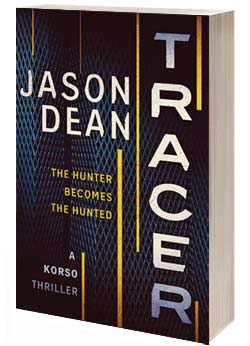 WHAT IS A DEATH SENTENCE TO A DEAD MAN?

He was a man with many names. Moving from country to country, changing his face so as to remain in the shadows, he was nothing more than a ghost. For now, he is known simply as Korso.

A covert salvage operative, he recovers lost artefacts, often stolen, for rich benefactors unable to operate through normal channels. But his shadowy existence is shattered upon the arrival at his Bermuda home of the man he had hoped never to see again…

Tasked with recovering a missing, one-of-a-kind shipment in only four days, his elite skill set will be tested to its limits. Failure will result in his identity being revealed to his former boss, the ruthless Nikolic, who'd stop at nothing to eliminate the one man who walked away from his organisation.

TRACER, the first in a brand new thriller series, on sale at booksellers and from Amazon, Apple & Kobo,

'Tracer, Korso's first outing, is everything you could want in a thriller; fast-pace, suspense, mystery, just the right amount of wickedness, but above all else a protagonist who the reader will want to read more and more of. A real page turner' Rob Sinclair, million copy bestselling author of The Red Cobra

'Meet Korso, a mysterious and unique character you won’t be able to get enough of. In a thriller novel I want tension, pace and ample action, and in Tracer, Jason Dean has delivered by the bucketful' Matt Hilton, author of the Joe Hunter thrillers

‘A relentless round of fast and furious set pieces, out-pacing Reacher for tension and with non-stop violence and intrigue to satisfy any thriller fans’ Adrian Magson, author of The Watchman

‘A thrilling, race-against-time ride ... a great start to what I’m sure will be a hugely successful thriller series’ A. A. Chaudhuri, author of The Scribe

'A superb, fast-paced thriller which literally ticks like a time-bomb' Nick Oldham, author of the Henry Christie series 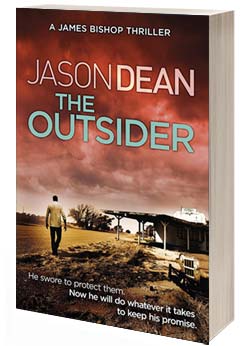 The Victim... John Strickland, an integral part of a high-profile murder case, is deep in witness protection following a hit in which his wife died. With 7 days to go until he testifies, all he and his son need to do now is survive.

The Protector... US Marshal Angela Delaney is in charge of Strickland's new protection team. Convinced there will be another attempt on his life, and fearing an inside leak, Delaney knows she needs outside help and there's only one person she wants.

The Outsider... James Bishop has worked close protection before and is intimately acquainted with Delaney. He never expected to see her again but when she re-appears, and he meets Strickland and his son, Bishop soon realizes he can't turn his back on them.

But can this outsider make the difference? Or are their lives about to get a whole lot tougher?

Find out in THE OUTSIDER, the fourth James Bishop thriller - on sale at all good bookshops and at Amazon 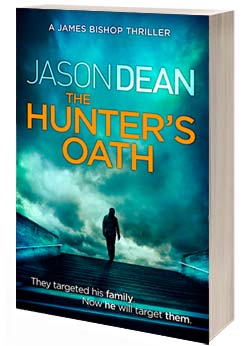 She was attacked and left for dead.

Amy Philmore knows something is wrong as she walks home alone through Fort George Hill in Upper Manhattan. When a car pulls up and three men get out Amy runs, but it's too late to escape. Now she is in hospital fighting for her life.

But her attackers are about to find themselves in even graver danger. Because Amy's brother is former Marine James Bishop. And when you target those he loves, he will do anything to save them.

With Amy's life hanging in the balance, Bishop takes matters into his own hands and soon uncovers a ruthless empire of criminals who will do anything to protect their secrets. Can Bishop find his way to the heart of the organisation before he is outnumbered?

Or is the predator about to become the prey?

The Hunter's Oath, the third novel to feature series character James Bishop, is available in paperback and Kindle, and can be ordered at Amazon and Waterstones.

'Immensely suspenseful and intelligent. Dean ratchets up the tension with a lean muscularity that will appeal to Lee Child fans.' Stav Sharez - Author of 'A Dark Redemption' and 'Eleven Days.' 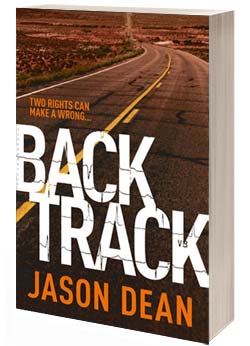 Sometimes a man must take a step back to move forwards...

In a small, sleepy Pennsylvania town, the staff of a loan store find themselves at the mercy of a gunman who demands they hand over the store's entire cash reserves. But when the sound of police sirens shatters the silence sooner than expected, the robber is forced to take a young female customer hostage in order to make his escape.

Former Marine James Bishop is no stranger to being on the wrong side of the law. Finally a free man, he has the chance to get his life back on track. But as he flees the scene of the hold-up with his terrified hostage, he once again finds himself a wanted man...

Prison can change some people. But has it changed Bishop?

Find out in Backtrack, the exciting follow-up to The Wrong Man. Available in hardback, paperback and Kindle at Amazon and Waterstones. 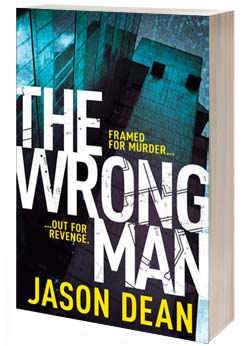 Former Marine James Bishop will only have one opportunity to make his prison break. And one chance to prove that he isn't responsible for the murders that put him inside.

Three years ago Bishop was the leader of an elite close protection team hired to protect a millionaire and his daughter. After a brutal attack by a well-armed assault team, Bishop regained consciousness to find seven bodies strewn throughout the millionaire's Long Island mansion - including those of his two charges - and a mountain of evidence guaranteed to send him down for murder.

But to find out who set him up and why, Bishop needs to be free. And now the time has come to make his move.

"The Wrong Man packs an electrifying punch with enough twists and turns to fill a snakes and ladders board and a tension-charged atmosphere that keeps the midnight oil burning... Jason Dean conjures up a classy thriller here." Lancashire Evening Post

"The Wrong Man is a roller coaster of a ride with a superhero at the helm. Doesn't miss a beat." Thrillers4U

"A thrilling debut from an author who has the necessary skills to entertain readers for many years to come." CrimeSquad

"...super-charged, super-paced and laden with thrills." The Northern Echo

Available in hardback, paperback, Kindle and audiobook versions, The Wrong Man can be purchased at Amazon, Waterstones, Tesco and ITunes.

Take a look at the official trailer below: